English 9 Enriched: “Pyramus and Thisbe” and Romeo and Juliet

After reading Act V of Romeo and Juliet: 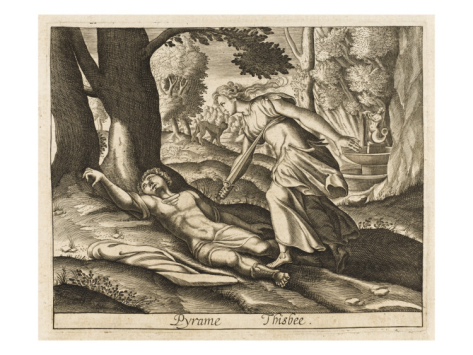 From Ovid’s Metamorphosis (around 1 AD), read the retelling of the ancient Babylonian myth of “Pyramus and Thisbe,” and prepare a See/Think/Wonder exercise:

3-      Three (3) things you WONDER about why Shakespeare, like Ovid, may have chosen to retell the storyline of an ancient Babylonian myth in his Romeo and Juliet

–          What themes or messages about human nature prevail in the stories of Pyramus and Thisbe, and Romeo and Juliet;

–          What lessons can be learned about human nature as you examine the timeline of this plot:

–          “They wished to join in marriage, but that joy their fathers had forbidden them to hope.”

–          “No relatives had guessed their secret love, for all their converse was by nods and signs.”

–          “All is arranged according to their hopes: and now the daylight, seeming slowly moved…”

–          “When Pyramus and Thisbe, who were known the one most handsome of all youthful men, the other    loveliest of all eastern girls…”

–          “Our lovers found the secret opening, and used its passage to convey the sounds of gentle, murmured words…”

–          “No more she said; and having fixed the point below her breast, she fell on the keen sword, still warm with his red blood.”

–          “And from the funeral pile their parents sealed their gathered ashes in a single urn.”

–          Romeo and Juliet were two young people who fell in love just like Pyramus and Thisbe.

–          Romeo and Juliet’s families forbade their love; likewise, Pyramus and Thisbe’s fathers also came in the way of their love.

–          Romeo kills himself after thinking that Juliet died and then Juliet sees Romeo dead and kills herself; the same thing happens to Pyramus and Thisbe.

–          In Romeo and Juliet, both parents re-united the lovers by promising to make gold statues of Rome and Juliet and lay them next to each other; in “Pyramus and Thisbe”, the parents seal the lovers’ ashes in a single urn.

–          Why Shakespeare included other characters (like the Nurse and Friar Lawrence) to know of Romeo and Juliet’s secret love instead of having no one know like in “Pyramus and Thisbe”.

–          Why Shakespeare included another character (Rosaline) whom Romeo loved before seeing Juliet.

–          Why Shakespeare didn’t make Romeo and Juliet see each other more to make it seem more realistic, like Ovid had made Pyramus and Thisbe communicate through a little opening in the wall separating them.

1.) “They wished to join in marriage… their fathers had forbidden them hope”

2.) “No relatives had guessed their secret love”

3.) “Our lovers found the secret opening, and used its passage to convey the sounds.”

4.) “What harm could happen thee shouldst thou permit us to enjoy our love?”

5.) “Deceived her parents, opened the closed door. She flitted in the silent night away.”

7.) “Deep in his bowels; and plucked it from the wound a-faint with death.”

8.) “Thisbe returned… she though her lover must await her at the tree”

9.) “No more she said; nad having fixed the point below her breast, she fell on the keen sword, still warm with his red blood.”

10.) “… her prayers were answered, for it moved the Gods and moved their parents.”

1.) Shakespeare used this ancient Babylonian myth as a basis for the tragedy of Romeo and Juliet.

2.) The plot of this ancient Babylonian myth is extremely similar to Romeo and Juliet.

3.) The main point of this ancient Babylonian myth and Romeo and Juliet is to teach a lesson about young love.

1.) Why Shakespeare used this myth to base Romeo and Juliet off of.

2.) What persuaded Shakespeare to want to teach this lesson about young love.

3.) If Shakespeare relates to any of these stories personally.

There are many messages, or themes that are prevailed from Romeo and Juliet and “Pyramus and Thisbe” such as secrets can be fatal, revenge hurts both the avenger and the victim, the elder forget the power of young love, but the main point trying to be focused on is how young love can blind a couple. Human nature is the general mix of feelings and behavior traits that humankind experiences. Human nature is what causes the lovers from Romeo and Juliet and “Pyramus and Thisbe” to eventually take their own lives because of the feelings that emerge from a series of casualties. Juliet’s love is so deep for Romeo that she is willing to put her family through great grief just so that she can be with him. This shows that Juliet has been blinded by the young love that many young couples experience. They have this mindset for one another that leaves everyone else in their life out and they don’t realize the harm they can inflict on the ones that love them. In “Pyramus and Thisbe” the two couples tell their fathers, “What harm could happen thee shouldst thou permit us to enjoy our love?” This question asked could have prevented every harmful thing that followed and would have saved lives. Sometimes parents are just unaware of their surroundings and themselves judge blindly with the many years of wisdom that they have. The themes mentioned above are present in every young couples live’s today. More often than not a breakup between couples ends up taking a great toll on the mental state. A breakup often ends up with blackmail or just rivalry between one another and sometimes can get serious with threats. Also, parents forget about how young love has a low boiling point. If two couples are neglected and forbidden to see on another, they will find their ways just like how in Ovid’s metamorphoses he states, “Our loves found the secret opening, and used its passage to convey the sounds.” Lessons that may be learned from human nature from this plot is to be logical. When Thisbe dropped her veil this doesn’t immediately suggest that she had been killed; if Pyramus had waited a prevention of two deaths could have occured. Suicidal decisions are not logical as they bring nothing but grief. Also, before getting in a mess of things be more decisive and don’t be blinded by young love.

I think the two are similar in that:

I think the two are different in that:

Themes are human nature can be seen in the both the play Romeo and Juliet by William Shakespeare and “Pyramus and Thisbe” by Ovid. In both stories, main characters “grow fond and love each other” (Ovid), leading them to do unexpected and sometimes quite dangerous things. This shows how it is human nature to love something and to do anything to continue to feel that love. This can be seen today where people are always trying to find something or someone to love either finding it on the web or going on blind dates. The two protagonists, although love one another very dearly, are not allowed to be with one another because “their fathers have forbidden them to hope” (Ovid). If there is a grudge between a certain two families, it is natural for the two families’ grudge to affect their children. Today, it is seen that parents may not approve of their child’s relationship to, and may try to prevent the relationship from expanding.This, however, can result in that the forbidden love will actually cause the love to sprout. The protagonists of both stories had kept their love a secret so that “no relatives had guessed their secret love” (Ovid). With this forbidden love, it is usual for people to continue to see one another, but to do so in a secretive manner, as to not arouse suspicion. This is similar to today, when a relationship would keep going even when the parents don’t approve, while all don’t suspect a single thing of the secret. Lastly, lost love can cause a person to feel overwhelming grief and will feel like “the ruin of two lovers” (Ovid). Grief is a common feeling to people when they lose a person that they really care about. Although most people today won’t go out of their way to actually kill themselves, the crushing feeling of loss will always be there. Times have greatly changed since Shakespeare and Ovid’s time, but th empathy and feelings expressed in the situations in these stories are still very common today.

Analysis Essay: Too Little, Too Late

In both William Shakespeare’s tragedy Romeo and Juliet and the short story “The Interlopers” by Saki, members of feuding families reconcile too late after tragedy strikes.

Your task:  After reading the prologue to Romeo and Juliet and “The Interlopers”, construct an essay in which you support the controlling idea of regret and reconciliation.

Audience: those who hold grudges even though the original conflict may have been long forgotten

Purpose: to persuade those who may be holding grudges to make an attempt at reconciliation before tragedy strickes; use the fate of characters from the above as support for your argument

Style: Be sure to analyze the authors’ use of literary techniques that help to express the idea of regret and reconciliation